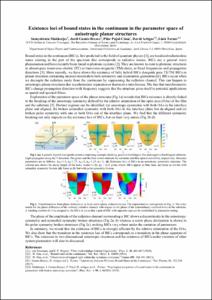 Document typeConference lecture
PublisherOptical Society of American (OSA)
Rights accessOpen Access
Abstract
Bound states in the continuum (BICs), first predicted in the field of quantum physics [1], are localized radiationless states existing in the part of the spectrum that corresponds to radiative modes. BICs are a general wave phenomenon and have recently been found in photonic systems [2]. They are known to exist in photonic structures in almost-pure transverse-electric (TE) or transverse-magnetic (TM) states, at fixed frequencies and propagation directions [3]. More recently, we have shown the existence of fully hybrid BICs alongside pure TE/TM BICs in planar structures containing uniaxial materials in both symmetric and asymmetric geometries [4]. BICs occur when we decouple the radiation mode from the continuum by suppressing the radiation channel. This can happen in anisotropic planar structures due to polarization separation or destructive interference. The fact that interferometric BICs change propagation direction with frequency suggests that the structure gives itself to potential applications as spatial and spectral filters.
CitationMukherjee, S. [et al.]. Existence loci of bound states in the continuum in the parameter space of anisotropic planar structures. A: Conference on Lasers & Electro-Optics / European Quantum Electronics Conference. "Proceedings 2019 Conference on Lasers and Electro-Optics Europe and European Quantum Electronics Conference: Munich, Germany: 23–27 June 2019". Washington: Optical Society of American (OSA), 2019.
URIhttp://hdl.handle.net/2117/181402
ISBN978-1-7281-0469-0
Publisher versionhttps://www.osapublishing.org/abstract.cfm?uri=eqec-2019-ec_p_10&origin=search
Collections
Share: