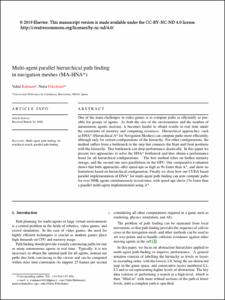 Document typeArticle
Rights accessOpen Access
Abstract
One of the main challenges in video games is to compute paths as efficiently as possible for groups of agents. As both the size of the environments and the number of autonomous agents increase, it becomes harder to obtain results in real time under the constraints of memory and computing resources. Hierarchical approaches, such as HNA* (Hierarchical A* for Navigation Meshes) can compute paths more efficiently, although only for certain configurations of the hierarchy. For other configurations, the method suffers from a bottleneck in the step that connects the Start and Goal positions with the hierarchy. This bottleneck can drop performance drastically. In this paper we present two approaches to solve the HNA* bottleneck and thus obtain a performance boost for all hierarchical configurations. The first method relies on further memory storage, and the second one uses parallelism on the GPU. Our comparative evaluation shows that both approaches offer speed-ups as high as 9x faster than A*, and show no limitations based on hierarchical configuration. Finally we show how our CUDA based parallel implementation of HNA* for multi-agent path finding can now compute paths for over 500K agents simultaneously in real-time, with speed-ups above 15x faster than a parallel multi-agent implementation using A*.
CitationRahmani, V.; Pelechano, N. Multi-agent parallel hierarchical path finding in navigation meshes (MA-HNA*). "Computers & graphics", Febrer 2020, vol. 86, p. 1-14.
URIhttp://hdl.handle.net/2117/181150
DOI10.1016/j.cag.2019.10.006
ISSN0097-8493
Publisher versionhttps://www.sciencedirect.com/science/article/abs/pii/S0097849319301694
Collections
Share: