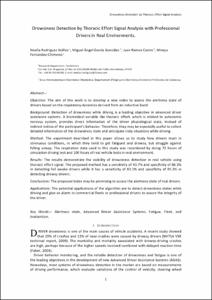 Except where otherwise noted, content on this work is licensed under a Creative Commons license : Attribution-NonCommercial-NoDerivs 3.0 Spain
Abstract
Objective : The aim of this work is to develop a new index to assess the alertness state of drivers based on the respiratory dynamics derived f rom an inductive band. Background : Detection of drowsiness while driving is a leadin g objective in advanced driver assistance systems. A biomedical variable like thor acic effort, which is related to autonomic nervous system, provides direct information of the driver physiological state, instead of indirect indicia of the participant's behavior. The refore, they may be especially useful to collect detailed information of the drowsiness state and an ticipate risky situations while driving. Method : The experiment described in this paper allows us to study how drivers react in strenuous conditions, in which they tend to get fat igued and drowsy, but struggle against falling asleep. The respiration data used in this s tudy was recordered by doing 72 hours of simulation driving test and 100 hours of real vehic le tests in real environment. Results : The results demonstrate the viability of drowsine ss detection in real vehicle using thoracic effort signal. The proposed method has a s ensitivity of 93.7% and specificity of 86.3% in detecting full awake drivers while it has a sens itivity of 83.1% and specificity of 95.3% in detecting drowsy drivers. Conclusions : The proposed index may be promising to assess the alertness state of real drivers. Applications : The potential applications of the algorithm are t o detect drowsiness states while driving and give an alarm in commercial fleets or p rofessional drivers to assure the integrity of the driver.
CitationRodriguez, N. [et al.]. Drowsiness detection by thoracic effort signal snalysis with professional drivers in real environments. A: International Conference on Driver Distraction and Inattention. "Driver Distraction & Inattention 2011: program, presentations & reviewed papers 2011". Gothenburg: 2011, p. 1-25.
URIhttp://hdl.handle.net/2117/18115
Publisher versionhttp://www.chalmers.se/safer/ddi2011-en/program/papers-presentations
Collections
Share: