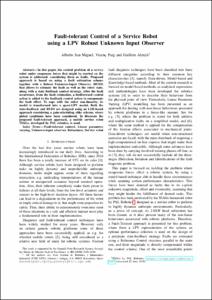 Document typeConference report
PublisherInstitute of Electrical and Electronics Engineers (IEEE)
Rights accessOpen Access
Abstract
In this paper, the control problem of a service robot under exogenous forces that might be exerted on the system is addressed, considering them as faults. Proposed approach is based on using a fault estimation scheme together with a Robust Unknown-Input Observer (RUIO) that allows to estimate the fault as well as the robot state, along with a state feedback control strategy. After the fault occurrence, from the fault estimation, a feedforward control action is added to the feedback control action to compensate the fault effect. To cope with the robot non-linearity, its model is transformed into a quasi-LPV model. Both the state-feedback and RUIO are designed using an LMI-based approach considering a gain-scheduling alike scheme, where global conditions have been considered. To illustrate the proposed fault-tolerant approach, a mobile service robot TIAGo, developed by PAL robotics, is used.
Description
© 2019 IEEE. Personal use of this material is permitted. Permission from IEEE must be obtained for all other uses, in any current or future media, including reprinting/republishing this material for advertising or promotional purposes, creating new collective works, for resale or redistribution to servers or lists, or reuse of any copyrighted component of this work in other works.
CitationSan Miguel, A.; Puig, V.; Alenyà, G. Fault-tolerant control of a service robot using a LPV robust unknown input observer. A: Conference on Control and Fault Tolerant Systems. "2019 4th Conference on Control and Fault Tolerant Systems (SysTol): proceedings". Institute of Electrical and Electronics Engineers (IEEE), 2019, p. 207-212.
URIhttp://hdl.handle.net/2117/181131
DOI10.1109/SYSTOL.2019.8864771
ISBN9781728103815
Publisher versionhttps://ieeexplore.ieee.org/document/8864771
Collections
Share: