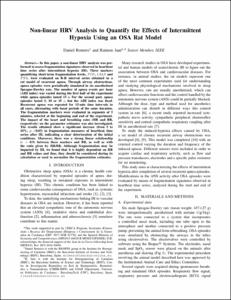 Document typeConference report
PublisherInstitute of Electrical and Electronics Engineers (IEEE)
Rights accessOpen Access
Abstract
In this paper, a non-linear HRV analysis was performed to assess fragmentation signatures observed in heartbeat time series after intermittent hypoxia (IH). Three markers quantifying short-term fragmentation levels, PIP, IALS and PSS, were evaluated on R-R interval series obtained in a rat model of recurrent apnea. Through airway obstructions, apnea episodes were periodically simulated in six anesthetized Sprague-Dawley rats. The number of apnea events per hour (AHI index) was varied during the first half of the experiment while apnea episodes lasted 15 s. For the second part, apnea episodes lasted 5, 10 or 15 s, but the AHI index was fixed. Recurrent apnea was repeated for 15-min time intervals in all cases, alternating with basal periods of the same duration. The fragmentation markers were evaluated in segments of 5 minutes, selected at the beginning and end of the experiment. The impact of the heart and breathing rates (HR and BR, respectively) on the parameter estimates was also investigated. The results obtained show a significant increase (from 5 to 10%, p <; 0.05) in fragmentation measures of heartbeat time series after IH, indicating a clear deterioration of the initial conditions. Moreover, there was a strong linear relationship (r > 0.9) between these markers and BR, as well as with the ratio given by HR/BR. Although fragmentation may be impacted by IH, we found that it is highly dependent on HR and BR values and thus, they should be considered during its calculation or used to normalize the fragmentation estimates
Description
© 2019 IEEE. Personal use of this material is permitted. Permission from IEEE must be obtained for all other uses, in any current or future media, including reprinting /republishing this material for advertising or promotional purposes, creating new collective works, for resale or redistribution to servers or lists, or reuse of any copyrighted component of this work in other works
CitationRomero, D.; Jane, R. Non-linear HRV analysis to quantify the effects of intermittent hypoxia using an OSA rat model. A: Annual International Conference of the IEEE Engineering in Medicine and Biology Society. "2019 41st Annual International Conference of the IEEE Engineering in Medicine and Biology Society (EMBC): proceedings". Institute of Electrical and Electronics Engineers (IEEE), 2019, p. 4994-4997.
URIhttp://hdl.handle.net/2117/181019
DOI10.1109/EMBC.2019.8857636
ISBN978-1-5386-1311-5
Publisher versionhttps://ieeexplore.ieee.org/document/8857636
Collections
Share: