A review of safety guidelines for vehicles in floodwaters 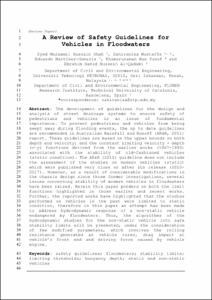 Yusof, Khamaruzaman Wan
Al-Qadamia, Ebrahim Hamid Hussein
Document typeArticle
Rights accessOpen Access
Abstract
The development of guidelines for the design and analysis of street drainage systems to ensure safety of pedestrians and vehicles is an issue of fundamental importance. To prevent pedestrians and vehicles from being swept away during flooding events, the up to date guidelines are recommended in Australian Rainfall and Runoff (AR&R, 2011) report. These guidelines are based on the upper bounds on both depth and velocity; and the constant limiting velocity × depth (v·y) functions derived from the earlier works (1967–1993) associated with the stability of old-fashioned vehicles (static condition). The AR&R (2011) guideline does not include the assessment of the studies on modern vehicles (static) which were published very close or after its release (2010–2017). However, as a result of considerable modifications in the chassis design since those former investigations, several issues concerning stability of modern vehicles in floodwaters have been raised. Herein this paper ponders on both the limit functions highlighted in those earlier and recent works. Further, the reported works have highlighted that the studies performed on vehicles in the past were limited to static condition, therefore in this paper an attempt has been made to address hydrodynamic response of a non-static vehicle endangered by floodwaters. Thus, the algorithms of the hydrodynamic studies for the non-static vehicle into safe stability limits will be presented, under the consideration of few modified parameters, which involves the rolling resistance generated at vehicle tires, drag impact at vehicle’s front end and driving force caused by vehicle engine
Description
This is an Accepted Manuscript of an article published by Taylor & Francis Group in International Journal of River Basin Management on 2019, available online at: http://www.tandfonline.com/10.1080/15715124.2019.1687487
CitationShah, S. [et al.]. A review of safety guidelines for vehicles in floodwaters. "International journal of river basin management", Novembre 2019.
URIhttp://hdl.handle.net/2117/180906
DOI10.1080/15715124.2019.1687487
ISSN1571-5124
Publisher versionhttps://www.tandfonline.com/doi/abs/10.1080/15715124.2019.1687487
Collections
Share: