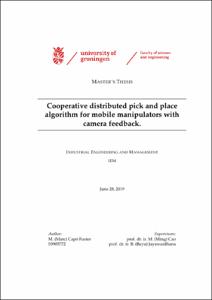 CovenanteeRijksuniversiteit Groningen
Document typeMaster thesis
Rights accessOpen Access
Abstract
The main goal of this research is to perform a pick and place task done by several mobile robots equipped with a robotic arm by using a distributed algorithm and a formation control law for keeping the shape. Nowadays, the industry sometimes needs the cooperation of different robots to achieve what cannot be reached by a single robot. Sometimes, the fact of using only a single robot can be either really expensive or not powerful enough and it is worth to implement a system with several agents. The studied case will be with four agents and it will be tested experimentally with the mobile nexus robots which are in the DTPA lab. The fact of being a task performed by several agents means that formation control theory will be taken into account, specifically the formation control Law designed by Garcia de Marina, Jayawardhana, and Cao [1]. Several studies and tests related to formation control have been performed in the PhD Nexus Group. Furthermore, some research about pick and place task has also been studied but only for a single robot. Because of this reason, the aim of this research is to extrapolate the results of the pick and place task done for one robot to a formation of several agents by using the formation control law previously specified. Moreover once the algorithm is tested in a four agent formation is relatively easy to change the number of agents by simply modifying some parameters. Challenges such as recognition of objects (Markers), tracking them (PI control) and keeping the formation of the agents (formation control theory) will be achieved by using the suitable sensors. For instance, a camera mounted on the robotic arm will be used for the recognition of objects, while a RPLidar Laser Scanner will be used for measuring the distances between robots and ensure that they keep the formation
SubjectsMobile robots, Manipulators (Mecanism), Robots mòbils, Manipuladors (Mecanismes)
URIhttp://hdl.handle.net/2117/180891
Collections
Share: