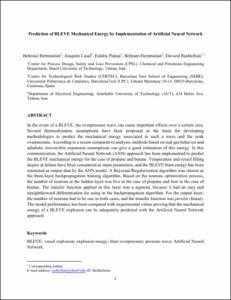 Except where otherwise noted, content on this work is licensed under a Creative Commons license : Attribution-NonCommercial-NoDerivs 3.0 Spain
Abstract
In the event of a BLEVE, the overpressure wave can cause important effects over a certain area. Several thermodynamic assumptions have been proposed as the basis for developing methodologies to predict both the mechanical energy associated to such a wave and the peak overpressure. According to a recent comparative analysis, methods based on real gas behavior and adiabatic irreversible expansion assumptions can give a good estimation of this energy. In this communication, the Artificial Neural Network (ANN) approach has been implemented to predict the BLEVE mechanical energy for the case of propane and butane. Temperature and vessel filling degree at failure have been considered as input parameters (plus vessel volume), and the BLEVE blast energy has been estimated as output data by the ANN model. A Bayesian Regularization algorithm was chosen as the three-layer backpropagation training algorithm. Based on the neurons optimization process, the number of neurons at the hidden layer was five in the case of propane and four in the case of butane. The transfer function applied in this layer was a sigmoid, because it had an easy and straightforward differentiation for using in the backpropagation algorithm. For the output layer, the number of neurons had to be one in both cases, and the transfer function was purelin (linear). The model performance has been compared with experimental values, proving that the mechanical energy of a BLEVE explosion can be adequately predicted with the Artificial Neural Network approach.
CitationHemmatian, B. [et al.]. Prediction of BLEVE mechanical energy by implementation of artificial neural network. "Journal of loss prevention in the process industries", 1 Gener 2020, vol. 63, p. 104021:1-104021:8.
URIhttp://hdl.handle.net/2117/180736
DOI10.1016/j.jlp.2019.104021
ISSN0950-4230
Publisher versionhttps://www.sciencedirect.com/science/article/pii/S0950423019301202
Collections
Share: