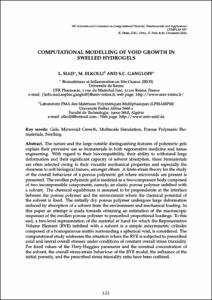 Show full item record
Siad, L.
Elkolli, M.
Gangloff, S.C.
Document typeConference report
PublisherCIMNE
Rights accessOpen Access
Abstract
The nature and the large notable distinguishing features of polymeric gels explain their pervasive use as biomaterials in both regenerative medicine and tissue engineering. With regard to their biocompatibility, their ability to withstand large deformation and their significant capacity of solvent absorption, these biomaterials are often selected owing to their versatile mechanical properties and especially the closeness to soft biological tissues, amongst others. A finite-strain theory for the study of the overall behaviour of a porous polymeric gel where microvoids are present is presented. The swollen polymeric gel is modeled as a two-component body composed of two incompressible components, namely, an elastic porous polymer imbibed with a solvant. The chemical equilibrium is assumed to be preponderate at the interface between the porous polymer and the environment where the chemical potential of the solvent is fixed. The initially dry porous polymer undergoes large deformation induced by absorption of a solvent from the environment and mechanical loading. In this paper an attempt is made towards obtaining an estimation of the macroscopic responses of the swollen porous polymer to prescribed proportional loadings. To this end, a two-level representation of the material at hand for which the Representative Volume Element (RVE) imbibed with a solvent is a simple axisymmetric cylinder composed of a homogeneous matrix surrounding a spherical void, is considered. The computational study addresses the situation where the RVE is subjected to prescribed axial and lateral overall stresses under conditions of constant overall stress triaxiality. For fixed values of the Flory-Huggins parameter and the nominal concentration of the solvent, the overall stress-strain behaviour of the RVE model, the influence of the initial porosity, and the prescribed stress triaxiality ratio have been outlined.
URIhttp://hdl.handle.net/2117/180600
ISBN978-84-946909-6-9
Collections
Share: