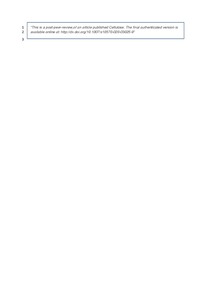 Javier Pastor, F.I.
Diaz Lucea, M. Pilar
Martínez Martínez, Josefina
Document typeArticle
Rights accessOpen Access
All rights reserved. This work is protected by the corresponding intellectual and industrial property rights. Without prejudice to any existing legal exemptions, reproduction, distribution, public communication or transformation of this work are prohibited without permission of the copyright holder
Abstract
This work studies the suitability of bacterial cellulose (BC) matrices to prepare enzymatically active nanocomposites, in a framework of more environmentally friendly methodologies. After BC production and purification, two kind of matrices were obtained: BC in aqueous suspension and BC paper. A lipase was immobilised onto the BC matrices by physical adsorption, obtaining Lipase/BC nanocomposites. Neither morphology nor crystallinity, measured by scanning electron microscopy and X-ray diffractometry respectively, of the BC were affected by the binding of the protein. The activity of Lipase/BC suspension and Lipase/BC paper was tested under different conditions, and the operational properties of the enzyme were evaluated. A shift towards higher temperatures, a broader pH activity range, and slight differences in the substrate preference were observed in the immobilised lipase, compared with the free enzyme. Specific activity was higher for Lipase/BC suspension (4.2 U/mg) than for Lipase/BC paper (1.7 U/mg) nanocomposites. However, Lipase/BC paper nanocomposites showed improved thermal stability, reusability, and durability. Enzyme immobilised onto BC paper retained 60% of its activity after 48 h at 60 °C. It maintained 100% of the original activity after being recycled 10 times at pH 7 at 60 °C and it remained active after being stored for more than a month at room temperature. The results suggested that lipase/BC nanocomposites are promising biomaterials for the development of green biotechnological devices with potential application in industrials bioprocesses of detergents and food industry and biomedicine. Lipase/BC paper nanocomposite might be a key component of bioactive paper for developing simple, handheld, and disposable devices
CitationBuruaga, C. [et al.]. Bacterial cellulose matrices to develop enzymatically active paper. "Cellulose", 31 Gener 2020, vol. 27, p. 3413-3426.
URIhttp://hdl.handle.net/2117/180519
DOI10.1007/s10570-020-03025-9
ISSN0969-0239
Publisher versionhttps://link.springer.com/article/10.1007/s10570-020-03025-9
Collections
Share: