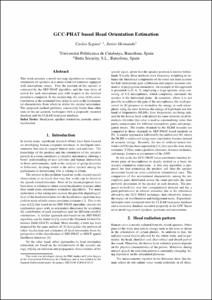 Document typeConference report
Rights accessOpen Access
Abstract
This work presents a novel two-step algorithm to estimate the orientation of speakers in a smart-room environment equipped with microphone arrays. First the position of the speaker is estimated by the SRP-PHAT algorithm, and the time delay of arrival for each microphone pair with respect to the detected position is computed. In the second step, the value of the cross- correlation at the estimated time delay is used as the fundamen- tal characteristic from where to derive the speaker orientation. The proposed method performs consistently better than other state-of-the-art acoustic techniques with a purposely recorded database and the CLEAR head pose database.
CitationSegura, C.; Hernando, J. GCC-PHAT based head orientation estimation. A: Annual Conference of the International Speech Communication Association. "13th Annual Conference of International Speech Communication Association". Portland: 2012, p. 1-4.
URIhttp://hdl.handle.net/2117/18034
Collections
Share: