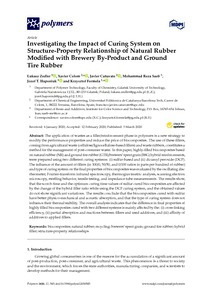 Saeb, Mohammad Reza
Haponiuk, Josef T
Formela, Krzysztof
Document typeArticle
PublisherMultidisciplinary Digital Publishing Institute (MDPI)
Rights accessOpen Access
Abstract
The application of wastes as a filler/reinforcement phase in polymers is a new strategy to modify the performance properties and reduce the price of biocomposites. The use of these fillers, coming from agricultural waste (cellulose/lignocellulose-based fillers) and waste rubbers, constitutes a method for the management of post-consumer waste. In this paper, highly-filled biocomposites based on natural rubber (NR) and ground tire rubber (GTR)/brewers’ spent grain (BSG) hybrid reinforcements, were prepared using two different curing systems: (i) sulfur-based and (ii) dicumyl peroxide (DCP). The influence of the amount of fillers (in 100/0, 50/50, and 0/100 ratios in parts per hundred of rubber) and type of curing system on the final properties of biocomposites was evaluated by the oscillating disc rheometer, Fourier-transform infrared spectroscopy, thermogravimetric analysis, scanning electron microscopy, swelling behavior, tensile testing, and impedance tube measurements. The results show, that the scorch time and the optimum curing time values of sulfur cured biocomposites are affected by the change of the hybrid filler ratio while using the DCP curing system, and the obtained values do not show significant variations. The results conclude that the biocomposites cured with sulfur have better physico-mechanical and acoustic absorption, and that the type of curing system does not influence their thermal stability. The overall analysis indicates that the difference in final properties of highly filled biocomposites cured with two different systems is mainly affected by the: (i) cross-linking efficiency, (ii) partial absorption and reactions between fillers and used additives, and (iii) affinity of additives to applied fillers
CitationZedler, L. [et al.]. Investigating the impact of curing system on structure-property relationship of natural rubber modified with brewery by-product and ground tire rubber. "Polymers", 3 Març 2020, vol. 12, núm. 3, p. 545:1-545:15.
URIhttp://hdl.handle.net/2117/180287
DOI10.3390/polym12030545
ISSN2073-4360
Publisher versionhttps://www.mdpi.com/2073-4360/12/3/545
Collections
Share: