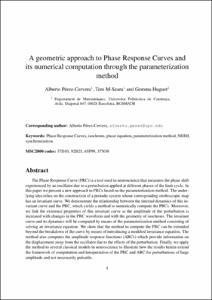 Tipo de documentoArtículo
Condiciones de accesoAcceso abierto
Resumen
The phase response curve (PRC) is a tool used in neuroscience that measures the phase shift experienced by an oscillator due to a perturbation applied at different phases of the limit cycle. In this paper, we present a new approach to PRCs based on the parameterization method. The underlying idea relies on the construction of a periodic system whose corresponding stroboscopic map has an invariant curve. We demonstrate the relationship between the internal dynamics of this invariant curve and the PRC, which yields a method to numerically compute the PRCs. Moreover, we link the existence properties of this invariant curve as the amplitude of the perturbation is increased with changes in the PRC waveform and with the geometry of isochrons. The invariant curve and its dynamics will be computed by means of the parameterization method consisting of solving an invariance equation. We show that the method to compute the PRC can be extended beyond the breakdown of the curve by means of introducing a modified invariance equation. The method also computes the amplitude response functions (ARCs) which provide information on the displacement away from the oscillator due to the effects of the perturbation. Finally, we apply the method to several classical models in neuroscience to illustrate how the results herein extend the framework of computation and interpretation of the PRC and ARC for perturbations of large amplitude and not necessarily pulsatile.
Descripción
The final publication is available at link.springer.com
CitaciónPerez, A.; Martinez-Seara, T.; Huguet, G. A geometric approach to phase response curves and its numerical computation through the parameterization method. "Journal of nonlinear science", 1 Gener 2019, vol. 29, p. 2877-2910.
URIhttp://hdl.handle.net/2117/180201
DOI10.1007/s00332-019-09561-4
ISSN0938-8974
Versión del editorhttps://link.springer.com/article/10.1007/s00332-019-09561-4
Colecciones
Comparte: