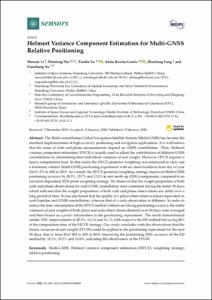 Fang, Zhenlong
Xu, Guochang
Document typeArticle
PublisherMultidisciplinary Digital Publishing Institute (MDPI)
Rights accessOpen Access
European Commission's projectNAVSCIN - High Accuracy Navigation under Scintillation Conditions (EC-H2020-797461)
Abstract
The Multi-constellation Global Navigation Satellite System (Multi-GNSS) has become the standard implementation of high accuracy positioning and navigation applications. It is well known that the noise of code and phase measurements depend on GNSS constellation. Then, Helmert variance component estimation (HVCE) is usually used to adjust the contributions of di¿erent GNSS constellations by determining their individual variances of unit weight. However, HVCE requires a heavy computation load. In this study, the HVCE posterior weighting was employed to carry out a kinematic relative Multi-GNSS positioning experiment with six short-baselines from day of year (DoY) 171 to 200 in 2019. As a result, the HVCE posterior weighting strategy improved Multi-GNSS positioning accuracy by 20.5%, 15.7% and 13.2% ineast-north-up(ENU) components, compared to an elevation-dependent (ED) priori weighting strategy. We observed that the weight proportion of both code and phase observations for each GNSS constellation were consistent during the entire 30 days, which indicates that the weight proportions of both code and phase observations are stable over a long period of time. It was also found that the quality of a phase observation is almost equivalent in each baseline and GNSS constellation, whereas that of a code observation is different. In order to reduce the time consumption off the HVCE method without sacrificing positioning accuracy, the stable variances of unit weights of both phase and code observations obtained over 30 days were averaged and then frozen as a priori information in the positioning experiment. The result demonstrated similar ENU improvements of 20.0%, 14.1% and 11.1% with respect to the ED method but saving 88% of the computation time of the HCVE strategy. Our study concludes with the observations that the frozen variances of unit weight (FVUW) could be applied to the positioning experiment for the next 30 days, that is, from DoY 201 to 230 in 2019, improving the positioning ENU accuracy of the ED method by 18.1%, 13.2% and 10.6%, indicating the effectiveness of the FVUW.
CitationMowen, L. [et al.]. Helmert Variance Component Estimation for Multi-GNSS Relative Positioning. "Sensors", 25 Gener 2020, vol. 20, núm. 3, p. 669:1-669:17.
URIhttp://hdl.handle.net/2117/179964
DOI10.3390/s20030669
ISSN1424-8220
Publisher versionhttps://www.mdpi.com/1424-8220/20/3/669
Collections
Share: