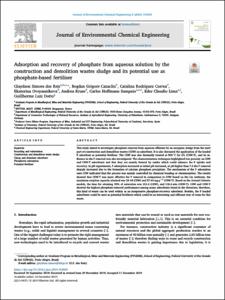 Lima, Eder Claudio
Dotto, Guillherme Luiz
Document typeArticle
PublisherElsevier
Rights accessOpen Access
Abstract
This study aimed to investigate phosphate removal from aqueous effluents by an inorganic sludge from the inert part of construction and demolition wastes (CSW) as adsorbent. It is also discussed the application of the loaded P adsorbent as potential fertiliser. The CSW was also thermally treated at 800¿°C for 2¿h (CSW-T), and its influence in the P removal was also investigated. The characterisation techniques highlighted low porosity on CSW and CSW-T adsorbents and that they are mainly formed by oxides which could enhance the P uptake and recovery. In pH experiments, P adsorption increased as initial pH increased, at pH higher than 7.8 the P removal sharply increased due to the formation of calcium phosphate precipitate. The mechanism of the P adsorption onto CSW indicated that the process was mainly controlled by chemical bonding or chemisorption. The results showed that CSW-T was more effective for P removal in comparison to CSW based on the Liu isotherm, the maximum sorption capacity attained was 24.04 (CSW) and 57.64¿mg¿g-1 (CSW-T). Based on the Avrami’s kinetic models, the time for attaining 95% of saturation was 212.6 (CSW), and 136.6¿min (CSW-T). CSW and CSW-T showed the highest phosphate-removal performance among many adsorbents found in the literature; therefore, this kind of waste can be used widely as an inexpensive phosphate-recovery adsorbent. Besides, the P loaded adsorbents could be used as potential fertilisers which could be an interesting and efficient way of reuse for this waste.
CitationSimoes dos Reis, G. [et al.]. Adsorption and recovery of phosphate from aqueous solution by the construction and demolition wastes sludge and its potential use as phosphate-based fertiliser. "Journal of environmental chemical engineering", 1 Febrer 2020, vol. 8, núm. 1, p. 103605: 1-103605: 11.
URIhttp://hdl.handle.net/2117/179961
DOI10.1016/j.jece.2019.103605
ISSN2213-3437
Publisher versionhttps://www.sciencedirect.com/science/article/pii/S2213343719307286
Collections
Share: