Hydrological application of radar rainfall nowcasting in the Netherlands 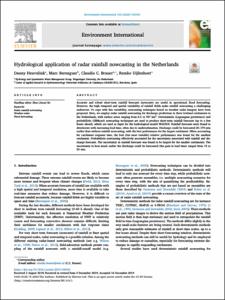 Brauer, Claudia
Uijlenhoet, Remko
Document typeArticle
PublisherElsevier
Rights accessOpen Access
European Commission's projectANYWHERE - EnhANcing emergencY management and response to extreme WeatHER and climate Events (EC-H2020-700099)
Abstract
Accurate and robust short-term rainfall forecasts (nowcasts) are useful in operational flood forecasting. However, the high temporal and spatial variability of rainfall fields make rainfall nowcasting a challenging endeavour. To cope with this variability, nowcasting techniques based on weather radar imagery have been proposed. Here, we employ radar rainfall nowcasting for discharge predictions in three lowland catchments in the Netherlands, with surface areas ranging from 6.5 to 957 km2. Deterministic (Lagrangian persistence) and probabilistic (SBMcast) nowcasting techniques are used to produce short-term rainfall forecasts (up to a few hours ahead), which are used as input for the hydrological model WALRUS. Rainfall forecasts were found to deteriorate with increasing lead time, often due to underestimation. Discharge could be forecasted 25–170 min earlier than without rainfall nowcasting, with the best performance for the largest catchment. When accounting for catchment response time, the best (but most variable) relative performance was found for the smallest catchment. Probabilistic nowcasting effectively accounted for the uncertainty associated with rainfall and discharge forecasts. The uncertainty in rainfall forecasts was found to be largest for the smaller catchments. The uncertainty in how much earlier the discharge could be forecasted (the gain in lead time) ranged from 15 to 50 min.
CitationHeuvelink, D. [et al.]. Hydrological application of radar rainfall nowcasting in the Netherlands. "Environment international", Març 2020, vol. 136, p. 105431:1-105431:10.
URIhttp://hdl.handle.net/2117/179903
DOI10.1016/j.envint.2019.105431
ISSN0160-4120
Publisher versionhttps://www.sciencedirect.com/science/article/pii/S0160412019327746
Collections
Share: