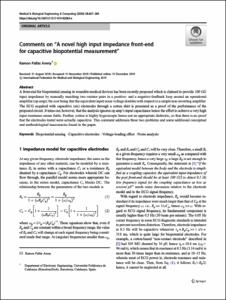 Document typeArticle
PublisherSpringer
Rights accessOpen Access
Abstract
A front-end for biopotential sensing in wearable medical devices has been recently proposed which is claimed to provide 100 GOinput impedance by manually matching two resistor pairs in a positive- and a negative-feedback loop around an operationalamplifier (op amp); the cost being that the equivalent input noise voltage doubles with respect to a simple non-inverting amplifier.The ECG acquired with capacitive (sic) electrodes through a cotton shirt is presented as a proof of the performance of theproposed circuit. It turns out, however, that the analysis ignores op amp’s input capacitance hence the effort to achieve a very highinput resistance seems futile. Further, cotton is highly hygroscopic hence not an appropriate dielectric, so that there is no proofthat the electrodes tested were actually capacitive. This comment addresses these two problems and some additional conceptualand methodological inaccuracies found in the paper.
CitationPallàs, R. Comments on “A novel high input impedance front-end for capacitive biopotential measurement”. "Medical & biological engineering & computing", 13 Desembre 2019, vol. 58, p. 267-269.
URIhttp://hdl.handle.net/2117/179818
DOI10.1007/s11517-019-02083-x
ISSN1741-0444
Publisher versionhttps://link.springer.com/article/10.1007%2Fs11517-019-02083-x
Collections
Share: