The role of sea-land air thermal difference, shape of the coastline and sea surface temperature in the nocturnal offshore convection 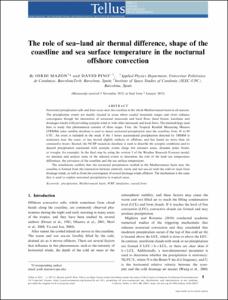 Document typeArticle
Rights accessOpen Access
Abstract
Nocturnal precipitation cells and lines occur near the coastline in the whole Mediterranean basin in all seasons. The precipitation events are mainly located in areas where coastal mountain ranges and rivers enhance convergence though the interaction of nocturnal mesoscale and local flows (land breeze, katabatic and drainages winds) with prevailing synoptic wind or with other mesoscale and local flows. The methodology used here to study this phenomenon consists of three stages. First, the Tropical Rainfall Measuring Mission (TRMM) radar satellite database is used to detect nocturnal precipitation near the coastline, from 18 to 09 UTC. An event is included in the study if the 3 hours accumulated precipitation detected by TRMM is stationary near the coast, or has moved slightly onshore or offshore, and has lasted no more than six consecutive hours. Second, the NCEP reanalysis database is used to describe the synoptic conditions and to discard precipitation associated with synoptic events (large low pressure areas, dynamic polar fronts, or troughs, for example). In the final step by using the version 3 of the Weather Research Forecast model, we simulate and analyse some of the selected events to determine the role of the land sea temperature differences, the curvature of the coastline and the sea surface temperature. The simulations confirm that the nocturnal precipitation studied in the Mediterranean basin near the coastline is formed from the interaction between relatively warm and wet sea-air with the cold air mass from drainage winds, as well as from the convergence of several drainage winds offshore. The mechanism is the same that is used to explain nocturnal precipitation in tropical areas.
CitationMazon, J.; Pino, D. The role of sea-land air thermal difference, shape of the coastline and sea surface temperature in the nocturnal offshore convection. "Tellus. Series A, dynamic meteorology and oceanography", 31 Gener 2013, vol. 65, núm. 20027.
URIhttp://hdl.handle.net/2117/17977
ISSN0280-6495
Publisher versionhttp://dx.doi.org/10.3402/tellusa.v65i0.20027
Collections
Share: