A micro Lie theory for state estimation in robotics 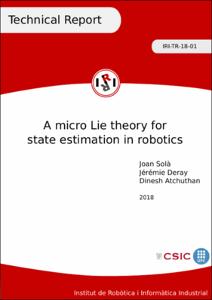 Except where otherwise noted, content on this work is licensed under a Creative Commons license : Attribution-NonCommercial-NoDerivs 3.0 Spain
Abstract
A Lie group is an old mathematical abstract object dating back to the XIX century, when mathematician Sophus Lie laid the foundations of the theory of continuous transformation groups. As it often happens, its usage has spread over diverse areas of science and technology many years later. In robotics, we are recently experiencing an important trend in its usage, at least in the fields of estimation, and particularly in motion estimation for navigation. Yet for a vast majority of roboticians, Lie groups are highly abstract constructions and therefore difficult to understand and to use. This may be due to the fact that most of the literature on Lie theory is written by and for mathematicians and physicists, who might be more used than us, perhaps by their academic formation, to the deep abstractions this theory deals with. In estimation for robotics, it is often not necessary to exploit the full capacity of the theory, and therefore an effort of selection of materials is required. In this paper, we will walk through the most basic principles of the Lie theory, with the aim of conveying clear and useful ideas, and leave a significant corpus of the Lie theory behind. Even with this mutilation, the material included here has proven to be extremely useful in modern estimation algorithms for robotics, especially in the fields of SLAM, visual odometry, and the like. We provide also a vast reference of formulas for the major groups used in robotics, including most jacobian matrices and the way to easily manipulate them.
CitationSolá, J.; Deray, J.; Atchuthan, D. "A micro Lie theory for state estimation in robotics". 2018.
Is part ofIRI-TR-18-01
URIhttp://hdl.handle.net/2117/179757
Collections
Share: