Assessment of the expected seismic damage in the aggregated masonry buildings of the late XIX century of Barcelona, Spain 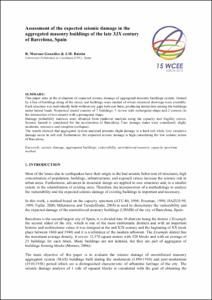 Assessment of the expected seismic damage in the aggregated masonry buildings of the lata XIX century of Barcelona, Spain (754,0Kb)
Share:

Document typeConference report
Rights accessOpen Access
Abstract
This paper aims at the evaluation of expected seismic damage of aggregated masonry buildings system, formed by a line of buildings along of the street; real buildings were studied of whom structural drawings were available. Each structure was individually built without any gaps between them, producing interaction among the buildings under lateral loads. Numerical model consists of 7 buildings: 5 in-row with rectangular shape and 2 corners (in the intersection of two streets) with a pentagonal shape. Damage probability matrices were obtained from pushover analysis using the capacity and fragility curves. Seismic hazard is considered for the acceleration of Barcelona. Four damage states were considered: slight, moderate, extensive and complete (collapse). The results showed that aggregated system analysed presents slight damage in a hard soil while very extensive damage occur in soft soil, furthermore, the expected seismic damage is high considering the low seismic action of Barcelona.
CitationMoreno, R.; Bairan, J. Assessment of the expected seismic damage in the aggregated masonry buildings of the late XIX century of Barcelona, Spain. A: World Conference on Earthquake Engineering. "Proceedings of the Fifteenth World Conference on Earthquake Engineering, Portugal, 2012". Lisboa: 2012, p. 1-10.
URIhttp://hdl.handle.net/2117/17975
Publisher versionhttp://cataleg.upc.edu/record=b1419259~S1*cat
Collections
Share: