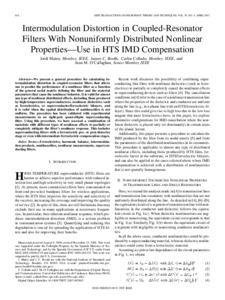 Document typeArticle
PublisherIEEE-INST ELECTRICAL ELECTRONICS ENGINEERS INC
Rights accessOpen Access
All rights reserved. This work is protected by the corresponding intellectual and industrial property rights. Without prejudice to any existing legal exemptions, reproduction, distribution, public communication or transformation of this work are prohibited without permission of the copyright holder
Abstract
We present a general procedure for calculating intermodulation distortion in coupled-resonator filters that allows one to predict the performance of a nonlinear filter as a function of the general nodal matrix defining the filter and the material parameters that cause the nonlinear behavior. It is valid for almost any type of nonlinear distributed effects, including those produced by high-temperature superconductors, nonlinear dielectrics such as ferroelectrics, or superconductor/ferroelectric bilayers, and it is valid when the spatial distribution of nonlinearities is not uniform. The procedure has been validated with experimental measurements in an eight-pole quasi-elliptic superconducting filter. Using this procedure, we have assessed a combination of materials with different types of nonlinear effects to partially or completely mitigate the filter's nonlinear response. This includes superconducting filters with a ferroelectric pre- or post-distorter stage or even with intermediate ferroelectric compensation stages.
CitationMateu J.; Booth J. C.; Collado C.; O'Callaghan, J. Intermodulation distortion in coupled-resonator filters with nonuniformly distributed nonlinear properties - Use in HTS IMD compensation.. IEEE TRANSACTIONS ON MICROWAVE THEORY AND TECHNIQUES, 2007, vol. 55, núm. 4, p. 616 - 624.
URIhttp://hdl.handle.net/2117/1797
ISSN0018-9480
Collections
Share: