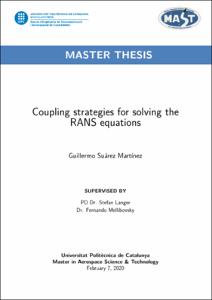 ; Langer, Stephan
CovenanteeDeutsches Zentrum für Luft-und Raumfahrt
Document typeMaster thesis
Rights accessOpen Access
All rights reserved. This work is protected by the corresponding intellectual and industrial property rights. Without prejudice to any existing legal exemptions, reproduction, distribution, public communication or transformation of this work are prohibited without permission of the copyright holder
Abstract
For the present work two implicit methods of coupling the compressible Reynolds Averaged Navier-Stokes equations in conjunction with the one equation Spalart-Allmaras turbulence model have been developed. The first approach, known as fully coupled technique, strongly couples the two different systems of equations, and accordingly solves for a single system. The second technique has been defined as weakly coupled approach. On the one hand, it also solves for a single set of equations. On the other hand, the full Jacobian is not build by excluding the evaluation of the cross derivatives. The latter approach must be understood in the sense of an intermediate step between the loosely and fully coupled techniques, allowing to evaluate the coupling solution strategy. The subject of this thesis is to examine whether it is advantageous to solve the systems of equations in a mathematically consistent coupled manner or loosely coupled. For the space discretization, an unstructured finite volume scheme based on node-centered dual mesh is used. The solution procedure is based on a nonlinear agglomeration multigrid technique combined with a multistage line implicit Runge-Kutta smoother. The inner system of equations is solved through a Block Symmetric Gauss-Seidel scheme. The assessment of the newly developed methodologies is obtained by a comparative study with a loosely coupled solution strategy along with experimental data. The attention is focused on the accuracy of the results, the number of overall cycles and convergence rates of the solution method. Several numerical computations have been carried out in four two-dimensional and three-dimensional well known benchmark test cases: the CASE 9, MDA30P30N, DPW5CRM and the NASA Trap Wing. The obtained results evidence that no improvement is obtained regarding accuracy but demonstrate superiorities and inferiorities in the convergence rate for the weakly coupled and fully coupled strategies.
SubjectsNavier-Stokes equations, Turbulence, Equacions de Navier-Stokes, Turbulència, Turbulència -- Models matemàtics
URIhttp://hdl.handle.net/2117/179467
Collections
Share: