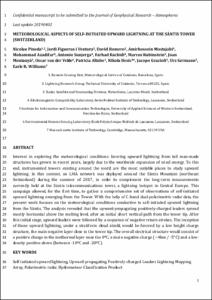 Altube Vázquez, Patricia
Besic, Nikola
Grazioli, Jacopo
Germann, Urs
Williams, Earle R.
Document typeArticle
Rights accessOpen Access
All rights reserved. This work is protected by the corresponding intellectual and industrial property rights. Without prejudice to any existing legal exemptions, reproduction, distribution, public communication or transformation of this work are prohibited without permission of the copyright holder
Abstract
Interest in exploring the meteorological conditions favoring upward lightning from tall man-made structures has grown in recent years, largely due to the worldwide expansion of wind energy. To this end, instrumented towers existing around the world are the most suitable places to study upward lightning. In this context, an LMA network was deployed around the Säntis Mountain (northeast Switzerland) during the summer of 2017, in order to complement the long-term measurements currently held at the Säntis telecommunications tower, a lightning hot spot in central Europe. This campaign allowed, for the first time, to gather a comprehensive set of observations of self-initiated upward lightning emerging from the Tower. With the help of C-band dual-polarimetric radar data, the present work focuses on the meteorological conditions conductive to self-initiated upward lightning from the Säntis. The analysis revealed that the upward propagating positively charged leaders spread mostly horizontal above the melting level, after an initial short vertical path from the tower tip. After this initial stage, the majority of upward leaders were followed by a sequence of negative return strokes. The inception upward lightning under a stratiform cloud shield would be favored by the low height of the charge structure. From the obtained results, it turns out that a key feature favoring self-initiated upward lightning would be the proximity of the tower tip to the melting level.
CitationPineda, N. [et al.]. Meteorological aspects of self-initiated upward lightning at the Säntis Tower (Switzerland). "Journal of geophysical research: atmospheres", 26 Desembre 2019, vol. 124, núm. 24, p. 14162-14183.
URIhttp://hdl.handle.net/2117/179425
DOI10.1029/2019JD030834
ISSN2169-8996
Publisher versionhttps://agupubs.onlinelibrary.wiley.com/doi/abs/10.1029/2019JD030834
Collections
Share: