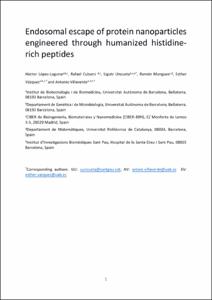 Unzueta, Ugutz
Mangues, Ramón
Vazquez, Esther
Villaverde, Antonio
Document typeArticle
Rights accessOpen Access
All rights reserved. This work is protected by the corresponding intellectual and industrial property rights. Without prejudice to any existing legal exemptions, reproduction, distribution, public communication or transformation of this work are prohibited without permission of the copyright holder
Abstract
Poly-histidine peptides such as H6 (HHHHHH) are used in protein biotechnologies as purification tags, pro- tein-assembling agents and endosomal-escape entities. The pleiotropic properties of such peptides make them appealing to design protein-based smart materials or nanoparticles for imaging or drug delivery to be produced in form of re- combinant proteins. However, the clinical applicability of H6- tagged proteins is restricted by the potential immunogenicity of these segments. In this study, we have explored several humanized histidine-rich peptides in tumor-targeted modular proteins, which can specifically bind and be internalized by the target cells through the tumoral marker CXCR4. We were particularly interested in exploring how protein purification, self-assembling and endosomal escape perform in proteins containing the variant histidine-rich tags. Among the tested candidates, the peptide H5E (HEHEHEHEH) is promising as a good promoter of endosomal escape of the associated full- length protein upon endosomal internalization. The numer- ical modelling of cell penetration and endosomal escape of the tested proteins has revealed a negative relationship between the amount of protein internalized into target cells and the efficiency of cytoplasmic release. This fact demonstrates that the His-mediated, proton sponge-based endosomal escape saturates at moderate amounts of internalized protein, a fact that might be critical for the design of protein materials for cytosolic molecular delivery.
CitationLopez-Laguna, H. [et al.]. Endosomal escape of protein nanoparticles engineered through humanized histidine-rich peptides. "SCIENCE CHINA Materials", April 2020, vol. 63, núm. 4, p. 644-653.
URIhttp://hdl.handle.net/2117/179196
DOI10.1007/s40843-019-1231-y
Publisher versionhttp://engine.scichina.com/doi/10.1007/s40843-019-1231-y
Other identifiershttps://link.springer.com/content/pdf/10.1007/s40843-019-1231-y.pdf
Collections
Share: