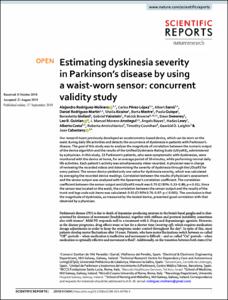 Except where otherwise noted, content on this work is licensed under a Creative Commons license : Attribution-NonCommercial-NoDerivs 3.0 Spain
Abstract
Our research team previously developed an accelerometry-based device, which can be worn on the waist during daily life activities and detects the occurrence of dyskinesia in patients with Parkinson’s disease. The goal of this study was to analyze the magnitude of correlation between the numeric output of the device algorithm and the results of the Unified Dyskinesia Rating Scale (UDysRS), administered by a physician. In this study, 13 Parkinson’s patients, who were symptomatic with dyskinesias, were monitored with the device at home, for an average period of 30¿minutes, while performing normal daily life activities. Each patient’s activity was simultaneously video-recorded. A physician was in charge of reviewing the recorded videos and determining the severity of dyskinesia through the UDysRS for every patient. The sensor device yielded only one value for dyskinesia severity, which was calculated by averaging the recorded device readings. Correlation between the results of physician’s assessment and the sensor output was analyzed with the Spearman’s correlation coefficient. The correlation coefficient between the sensor output and UDysRS result was 0.70 (CI 95%: 0.33–0.88; p¿=¿0.01). Since the sensor was located on the waist, the correlation between the sensor output and the results of the trunk and legs scale sub-items was calculated: 0.91 (CI 95% 0.76–0.97: p¿<¿0.001). The conclusion is that the magnitude of dyskinesia, as measured by the tested device, presented good correlation with that observed by a physician.
CitationRodríguez, A. [et al.]. Estimating dyskinesia severity in Parkinson's disease by using a waist-worn sensor: concurrent validity study. "Scientific reports", 17 Setembre 2019, vol. 9, núm. 13434.
URIhttp://hdl.handle.net/2117/179193
DOI10.1038/s41598-019-49798-3
ISSN2045-2322
Publisher versionhttps://www.nature.com/articles/s41598-019-49798-3
Collections
Share: