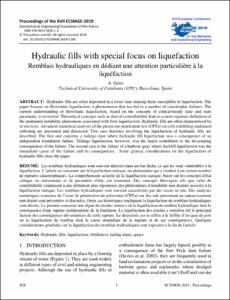 Document typeConference report
PublisherInternational Society for Soil Mechanics and Geotechnical Engineering (ISSMGE)
Rights accessOpen Access
Abstract
Hydraulic fills are often deposited in a loose state making them susceptible to liquefaction. The paper focuses on flow/static liquefaction, a phenomenon that has led to a number of catastrophic failures. The current understanding of flow/static liquefaction, based on the concepts of critical/steady state and state parameter, is reviewed. Theoretical concepts such as that of controllability lead to a more rigorous definition of the undrained instability phenomena associated with flow liquefaction. Hydraulic fills are often characterised by in situ tests. Advanced numerical analyses of the piezocone penetration test (CPTu) on soils exhibiting undrained softening are presented and discussed. Two case histories involving the liquefaction of hydraulic fills are described. The first one concerns a tailings dam where hydraulic fill liquefaction was a consequence of an independent foundation failure. Tailings liquefaction, however, was the major contributor to the devastating consequences of the failure. The second case is the failure of a harbour quay where backfill liquefaction was the immediate cause of the failure and its consequences. Some general considerations on the liquefaction of hydraulic fills close the paper.
CitationGens, A. Hydraulic fills with special focus on liquefaction. A: European Conference on Soil Mechanics and Geotechnical Engineering. "Proceedings of the XVII ECSMGE-2019: Geotechnical Engineering foundation of the future". International Society for Soil Mechanics and Geotechnical Engineering (ISSMGE), 2019, p. 1-31.
URIhttp://hdl.handle.net/2117/179180
ISBN978-9935-9436-1-3
Publisher versionhttps://www.issmge.org/uploads/publications/51/75/1114-ecsmge-2019_Gens%20K3-keynote%20paper.pdf
Collections
Share: