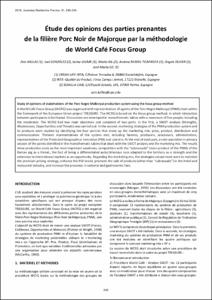 Except where otherwise noted, content on this work is licensed under a Creative Commons license : Attribution-NonCommercial-NoDerivs 3.0 Spain
ProjectTREASURE - DIVERSITY OF LOCAL PIG BREEDS AND PRODUCTION SYSTEMS FOR HIGH QUALITY TRADITIONAL PRODUCTS AND SUSTAINABLE PORK CHAINS (EC-H2020-634476)
Abstract
A World Café Focus Group (WCFG) was organised with representatives of agents of the Porc Negre Mallorquí (PNM) chain within the framework of the European Union project TREASURE. The WCFG is based on the focus group method, in which interaction between participants is facilitated. Discussions are developed in monothematic tables with a maximum of five people, including the moderator. The WCFG had two main objectives and consisted of two parts. In the first, a SWOT analysis (Strengths, Weaknesses, Opportunities and Threats) was carried out. In the second, marketing strategies of the PNM production system and its products were studied by identifying the four policies that make up the marketing mix: price, product, distribution and communication. Thirteen representatives of the system met, including farmers, producers, processors, administrators, representatives of the Protected Geographical Indication (PGI) and caterers. At the end of each part, a vote was taken in plenary session of the points identified in the monothematic tables that dealt with the SWOT analysis and the marketing mix. The results show production costs as the most important weakness, competition with the “sobrassada” (main product of the PNM) of the Iberian pig as a threat,; the fact of being a differentiated autochthonous race adapted to the territory as a strength and the extension to international markets as an opportunity. Regarding the marketing mix, the strategies valued most were to maintain the premium pricing strategy, enhance the PGI brand, promote the sale of products (other than “sobrassada”) in the hotel and restaurant industry, and increase the presence in sectorial and gastronomic fairs.
CitationKallas, Z. [et al.]. Étude des opinions des parties prenantes de la filière Porc Noir de Majorque par la méthodologie de World Café Focus Group. A: Journées de la Recherche Porcine en France. "Resumé Journées de la Recherche Porcine". 2020, p. 245-246.
URIhttp://hdl.handle.net/2117/178884
Other identifiershttp://www.journees-recherche-porcine.com/texte/2019.php
Collections
Share: