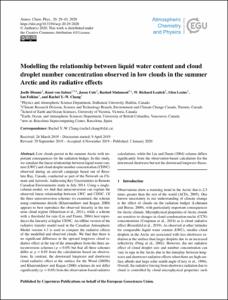 Show full item record
Dionne, Joelle
Salzen, Knut von
Cole, Jason
Mahmood, Rashed
Leaitch, W. Richard
Lesins, Glen
Folkins, Ian
Chang, Rachel
Document typeArticle
PublisherEuropean Geoscience Union
Rights accessOpen Access
Abstract
Low clouds persist in the summer Arctic with important consequences for the radiation budget. In this study, we simulate the linear relationship between liquid water content (LWC) and cloud droplet number concentration (CDNC) observed during an aircraft campaign based out of Resolute Bay, Canada, conducted as part of the Network on Climate and Aerosols: Addressing Key Uncertainties in Remote Canadian Environments study in July 2014. Using a single-column model, we find that autoconversion can explain the observed linear relationship between LWC and CDNC. Of the three autoconversion schemes we examined, the scheme using continuous drizzle (Khairoutdinov and Kogan, 2000) appears to best reproduce the observed linearity in the tenuous cloud regime (Mauritsen et al., 2011), while a scheme with a threshold for rain (Liu and Daum, 2004) best reproduces the linearity at higher CDNC. An offline version of the radiative transfer model used in the Canadian Atmospheric Model version 4.3 is used to compare the radiative effects of the modelled and observed clouds. We find that there is no significant difference in the upward longwave cloud radiative effect at the top of the atmosphere from the three autoconversion schemes (p=0.05) but that all three schemes differ at p=0.05 from the calculations based on observations. In contrast, the downward longwave and shortwave cloud radiative effect at the surface for the Wood (2005b) and Khairoutdinov and Kogan (2000) schemes do not differ significantly (p=0.05) from the observation-based radiative calculations, while the Liu and Daum (2004) scheme differs significantly from the observation-based calculation for the downward shortwave but not the downward longwave fluxes.
CitationDionne, J. [et al.]. Modelling the relationship between liquid water content and cloud droplet number concentration observed in low clouds in the summer Arctic and its radiative effects. "Atmospheric chemistry and physics", 2 Gener 2020, vol. 20, núm. 1, p. 29-43.
URIhttp://hdl.handle.net/2117/178812
DOI10.5194/acp-20-29-2020
ISSN1680-7324
Publisher versionhttps://www.atmos-chem-phys.net/20/29/2020/
Collections
Share: