National citation patterns of NEJM, The Lancet, JAMA and The BMJ in the lay press: a quantitative content analysis 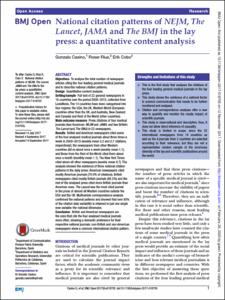 Except where otherwise noted, content on this work is licensed under a Creative Commons license : Attribution-NonCommercial 3.0 Spain
ProjectMIROR - Methods in Research on Research (EC-H2020-676207)
Abstract
Objectives: To analyse the total number of newspaper articles citing the four leading general medical journals and to describe national citation patterns. Design: Quantitative content analysis. Setting/sample: Full text of 22 general newspapers in 14 countries over the period 2008–2015, collected from LexisNexis. The 14 countries have been categorised into four regions: the USA, the UK, Western World (European countries other than the UK, and Australia, New Zealand and Canada) and Rest of the World (other countries). Main outcome measure Press citations of four medical journals (two American: NEJM and JAMA; and two British: The Lancet and The BMJ) in 22 newspapers. Results: British and American newspapers cited some of the four analysed medical journals about three times a week in 2008–2015 (weekly mean 3.2 and 2.7 citations, respectively); the newspapers from other Western countries did so about once a week (weekly mean 1.1), and those from the Rest of the World cited them about once a month (monthly mean 1.1). The New York Times cited above all other newspapers (weekly mean 4.7). The analysis showed the existence of three national citation patterns in the daily press: American newspapers cited mostly American journals (70.0% of citations), British newspapers cited mostly British journals (86.5%) and the rest of the analysed press cited more British journals than American ones. The Lancet was the most cited journal in the press of almost all Western countries outside the USA and the UK. Multivariate correspondence analysis confirmed the national patterns and showed that over 85% of the citation data variability is retained in just one single new variable: the national dimension. Conclusion: British and American newspapers are the ones that cite the four analysed medical journals more often, showing a domestic preference for their respective national journals; non-British and non-American newspapers show a common international citation pattern.
CitationCasino, G.; Rius, R.; Cobo, E. National citation patterns of NEJM, The Lancet, JAMA and The BMJ in the lay press: a quantitative content analysis. "BMJ Open", 1 Novembre 2017, vol. 7, núm. 11, p. 1-6.
URIhttp://hdl.handle.net/2117/178748
DOI10.1136/bmjopen-2017-018705
ISSN2044-6055
Publisher versionhttp://bmjopen.bmj.com/content/7/11/e018705
Collections
Share: