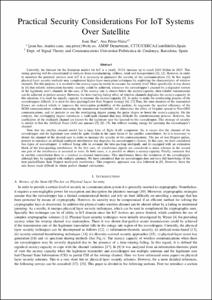 Document typeConference report
PublisherKa and Broadband Communications, Navigation and Earth Observation Conference
Rights accessOpen Access
Abstract
Currently, the forecast for the European market for IoT is a yearly 19.8% increase up to reach $241 billion in 2025. Thisstrong growing will be concentrated in verticals from manufacturing, utilities, retail and transportation [1], [2]. However, in orderto monetize the potential services over IoT it is necessary to guarantee the security of the communications [3]. In this regardphysical-layer security methods may complement higher-layer encryption techniques by exploiting the characteristics of wirelesschannels. For this purpose, it is resorted to the secrecy-capacity metric to measure the security level. More specifically, it was shownin [4] that reliable information-theoretic security could be achieved, whenever the eavesdropper’s channel be a degraded versionof the legitimate user’s channel. In this case, if the secrecy rate is chosen below the secrecy-capacity, then reliable transmissionscan be achieved in perfect secrecy. However, the time-varying fading effect of wireless channels degrades the secrecy-capacity. Inthis situation, it is used the ergodic capacity to measure the secrecy-capacity [5]. In order to make the overhearing process of theeavesdroppers difficult, it is used the time-packing/faster than Nyquist strategy [6]- [7].Thus, the time-duration of the transmittedframes are reduced which: i) improves the interception probability of the packets, ii) augments the spectral efficiency of theM2M communications without increasing the transmission bandwidth, iii) diminishes the effect of Doppler spread in Non-GEOcommunications, and iv) permits to use the overlapping degree among the pulse shapes to boost the secrecy-capacity. On thecontrary, this overlapping degree introduces a multi-path channel that may difficult the synchronization process. However, thecoefficients of the multipath channel are known by the legitimate user but ignored by the eavesdropper. This strategy of securityis similar to that the Artificial Noise (AN) one pursues [5], [8]- [9], but without wasting energy for jamming the eavesdropper’schannel.Note that the satellite channel model has a large Line of Sight (LoS) component. So, it means that the channel of theeavesdropper and the legitimate user could be quite similar in the same beam of the satellite constellation. So it is necessary todistort the channel of the desired user in order to increase the security of the communications. The use of non-Nyquist pulses,permits to introduce an artificial multipath interference that degrades the eavesdropper’s channel. In this case, we have consideredtwo types of eavesdropper: i) without being able to estimate the time-packing multipath, and ii) equipped with an estimationblock of the time-packing interference. In the first case, all interference signals are considered as noise whereas in the secondone part of the interference is assumed as noise. In both cases, it is possible to obtain a secrecy-capacity. Finally, comment thatin satellite constellation there is a residual co-channel interference. This interference limits the resolution of the eavesdroppersalthough they be equipped with multiple antennas. We have considered that the eavesdropper does not have full knowledge of thetime-packed/faster than Nyquist multi-path interference. This pragmatic approach was also followed in [9]. However, there therain losses made difficult to obtain perfect channel estimations.
CitationBas, J.; Perez, A. Practical security considerations for IoT systems over satellite. A: Ka and Broadband Communications Conference. "25th Ka and Broadband Communications Conference: Sorrento, Italy: September 30 to October 2, 2019". Ka and Broadband Communications, Navigation and Earth Observation Conference, 2019, p. 1-8.
URIhttp://hdl.handle.net/2117/178738
ISBN2573-6124
Publisher versionhttp://proceedings.kaconf.org/papers/2019/ka15_4.pdf
Collections
Share: