Feasibility assessment of rooftop greenhouses in Latin America. The case study of a social neighborhood in Quito, Ecuador 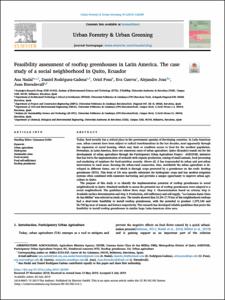 Rieradevall Pons, Joan
Document typeArticle
Rights accessOpen Access
Abstract
Today, food security has a critical place in the government agendas of developing countries. In Latin American case, urban contexts have been subject to radical transformations in the last decades, most apparently through the expansion of social housing, which may limit or condition access to food for the neediest population. Nowadays, in Latin America, there are numerous cases of urban agriculture. Quito (Ecuador) stands out for the development of urban agriculture through the Participatory Urban Agriculture Project - AGRUPAR; initiative that has led to the implementation of orchards with organic production, raising of small animals, food processing and marketing of surpluses for food-nutrition security. Above all, it has transcended its urban and peri-urban intervention to rural areas, favoring the urban-rural connection. Also, worldwide the urban agriculture is developed in different forms, one of which is through crops protected by a greenhouse on the roofs: Rooftop greenhouse (RTG). This form of UA uses specific substrates for hydroponic crops and has modern irrigation systems often combined with rainwater harvesting and provides a unique opportunity to improve urban agriculture in Quito. The purpose of this study is to identify the implementation potential of rooftop greenhouses in social neighborhoods in Quito. Standard methods to assess the potential use of rooftop greenhouses were adapted to a social neighborhood. The guidelines follow three steps: Step 1: Characterization based on criteria; Step 2: Available surface determination and Step 3: Production, self-sufficiency and self-supply. “La Comuna Santa Clara de San Millán” was selected as study area. The results showed that 33.2% (7.70¿ha) of the neighborhood rooftops had a short-term feasibility to install rooftop greenhouses, with the potential to produce 1,579,140 and 56,720¿kg/year of tomato and lettuce respectively. The research has developed reliable guidelines that prove the feasibility to install rooftop greenhouses in similar large Latin-American cities area.
Location
1: Humberto Albornoz 1912, Quito 170129, Equador
CitationNadal, A. [et al.]. Feasibility assessment of rooftop greenhouses in Latin America. The case study of a social neighborhood in Quito, Ecuador. "Urban forestry & urban greening", Agost 2019, vol. 44, núm. 126389.
URIhttp://hdl.handle.net/2117/178695
DOI10.1016/j.ufug.2019.126389
ISSN1610-8167
Collections
Share: