Field rules and bias in random surveys with quota samples. An assessment of CIS surveys 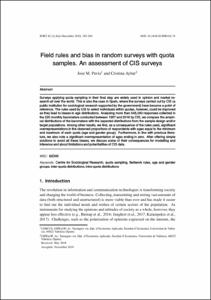 Show full item record
Pavía, José M.
Aybar, Cristina
Document typeArticle
PublisherInstitut d'Estadística de Catalunya
Rights accessOpen Access
Abstract
Surveys applying quota sampling in their final step are widely used in opinion and market research all over the world. This is also the case in Spain, where the surveys carried out by CIS (a public institution for sociological research supported by the government) have become a point of reference. The rules used by CIS to select individuals within quotas, however, could be improved as they lead to biases in age distributions. Analysing more than 545,000 responses collected in the 220 monthly barometers conducted between 1997 and 2016 by CIS, we compare the empirical distributions of the barometers with the expected distributions from the sample design and/or target populations. Among other results, we find, as a consequence of the rules used, significant overrepresentations in the observed proportions of respondents with ages equal to the minimum and maximum of each quota (age and gender group). Furthermore, in line with previous literature, we also note a significant overrepresentation of ages ending in zero. After offering simple solutions to avoid all these biases, we discuss some of their consequences for modelling and inference and about limitations and potentialities of CIS data.
CitationPavía, J. M.; Aybar, C. Field rules and bias in random surveys with quota samples. An assessment of CIS surveys. "SORT", 21 Desembre 2018, vol. 1, p. 183-206.
URIhttp://hdl.handle.net/2117/178508
ISSN1696-2281
Collections
Share: