Urban agriculture in the framework of sustainable urbanism 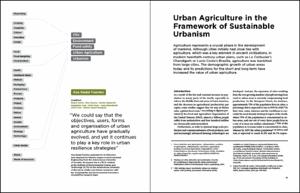 Sanyé-Mengual, Esther
Document typeArticle
Rights accessOpen Access
Abstract
Agriculture represents a crucial phase in the development of mankind. Although cities initially had close ties withagriculture, which was a key element in ancient civilisations, in modern twentieth-century urban plans, such as Le Corbusier’s Chandigarh or Lucio Costa’s Brazilia, agriculture was banished from large cities. The demographic growth of urban areas today and its predictions for the short and long term have increased the value of urban agriculture.
CitationNadal, A. [et al.]. Urban agriculture in the framework of sustainable urbanism. "Temes de disseny", 2015, núm. 31, p. 92-103.
URIhttp://hdl.handle.net/2117/178391
ISSN0213-6023
Publisher versionhttp://www.raco.cat/index.php/Temes/article/view/299595/390474
Collections
Share: