Classification of changes in API evolution 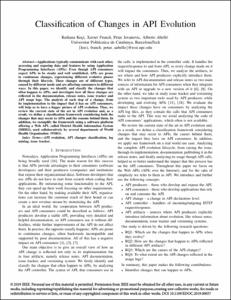 Document typeConference lecture
PublisherInstitute of Electrical and Electronics Engineers (IEEE)
Rights accessOpen Access
Abstract
Applications typically communicate with each other, accessing and exposing data and features by using Application Programming Interfaces (APIs). Even though API consumers expect APIs to be steady and well established, APIs are prone to continuous changes, experiencing different evolutive phases through their lifecycle. These changes are of different types, caused by different needs and are affecting consumers in different ways. In this paper, we identify and classify the changes that often happen to APIs, and investigate how all these changes are reflected in the documentation, release notes, issue tracker and API usage logs. The analysis of each step of a change, from its implementation to the impact that it has on API consumers, will help us to have a bigger picture of API evolution. Thus, we review the current state of the art in API evolution and, as a result, we define a classification framework considering both the changes that may occur to APIs and the reasons behind them. In addition, we exemplify the framework using a software platform offering a Web API, called District Health Information System (DHIS2), used collaboratively by several departments of World Health Organization (WHO).
CitationKoçi, R. [et al.]. Classification of changes in API evolution. A: IEEE International Enterprise Distributed Object Computing Conference. "2019 IEEE 23rd International Enterprise Distributed Object Computing Conference, EDOC 2019: Paris, France, 28-31 October 2019: proceedings". Institute of Electrical and Electronics Engineers (IEEE), 2019, p. 243-249.
URIhttp://hdl.handle.net/2117/178351
DOI10.1109/EDOC.2019.00037
ISBN978-1-7281-2702-6
Publisher versionhttps://ieeexplore.ieee.org/document/8944981
Collections
Share: