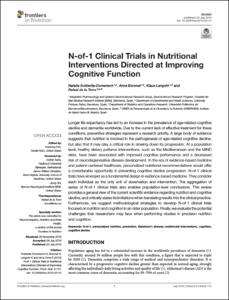 De la Torre Fornell, Rafael
Document typeArticle
Rights accessOpen Access
Abstract
Longer life expectancy has led to an increase in the prevalence of age-related cognitive decline and dementia worldwide. Due to the current lack of effective treatment for these conditions, preventive strategies represent a research priority. A large body of evidence suggests that nutrition is involved in the pathogenesis of age-related cognitive decline, but also that it may play a critical role in slowing down its progression. At a population level, healthy dietary patterns interventions, such as the Mediterranean and the MIND diets, have been associated with improved cognitive performance and a decreased risk of neurodegenerative disease development. In the era of evidence-based medicine and patient-centered healthcare, personalized nutritional recommendations would offer a considerable opportunity in preventing cognitive decline progression. N-of-1 clinical trials have emerged as a fundamental design in evidence-based medicine. They consider each individual as the only unit of observation and intervention. The aggregation of series of N-of-1 clinical trials also enables population-level conclusions. This review provides a general view of the current scientific evidence regarding nutrition and cognitive decline, and critically states its limitations when translating results into the clinical practice. Furthermore, we suggest methodological strategies to develop N-of-1 clinical trials focused on nutrition and cognition in an older population. Finally, we evaluate the potential challenges that researchers may face when performing studies in precision nutrition and cognition.
CitationSoldevila, N. [et al.]. N-of-1 clinical trials in nutritional interventions directed at improving cognitive function. "Frontiers in Nutrition", 23 Juliol 2019, vol. 6, p. 1-20.
URIhttp://hdl.handle.net/2117/178255
DOI10.3389/fnut.2019.00110
ISSN2296-861X
Publisher versionhttps://www.frontiersin.org/articles/10.3389/fnut.2019.00110/full
Collections
Share: