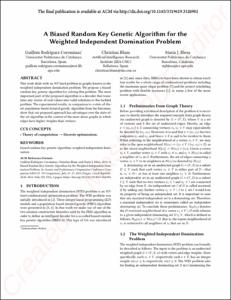 Document typeConference lecture
PublisherAssociation for Computing Machinery (ACM)
Rights accessOpen Access
Abstract
This work deals with an NP-hard problem in graphs known as the weighted independent domination problem. We propose a biased random key genetic algorithm for solving this problem. The most important part of the proposed algorithm is a decoder that translates any vector of real-values into valid solutions to the tackled problem. The experimental results, in comparison to a state-of-the-art population-based iterated greedy algorithm from the literature, show that our proposed approach has advantages over the state-of-the-art algorithm in the context of the more dense graphs in which edges have higher weights than vertices.
CitationRodríguez, G.; Blum, C.; Blesa, M. A biased random key genetic algorithm for the weighted independent domination problem. A: Genetic and Evolutionary Computation Conference. "GECCO’19 Companion: proceedings of the 2019 Genetic and Evolutionary Computation Conference Companion: July13-17, 2019, Prague, Czech Republic". New York: Association for Computing Machinery (ACM), 2019, p. 2052-2055.
URIhttp://hdl.handle.net/2117/178179
DOI10.1145/3319619.3326901
ISBN978-1-4503-6748-6
Publisher versionhttps://dl.acm.org/doi/10.1145/3319619.3326901
Collections
Share: