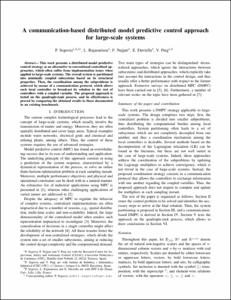 Document typeConference report
Rights accessOpen Access
Abstract
This work presents a distributed model predictive control strategy as an alternative to conventional centralized approaches, which often suffer from implementation issues when applied to large-scale systems. The overall system is partitioned into minimally coupled subsystems based on its structural properties. Then, the coordination among the subproblems is achieved by means of a communication protocol, which allows each local controller to broadcast its solution to the rest of controllers with a coupled variable. The proposed approach is tested on the quadruple-tank process, and its effectiveness is proved by comparing the obtained results to those documented in an existing benchmark.
CitationSegovia, P. [et al.]. A communication-based distributed model predictive control approach for large-scale systems. A: CDC - IEEE Conference on Decision and Control. "CDC 2019: 58th IEEE Conference on Decision and Control: Nice, France, December 11-13, 2019, proceedings book". 2019, p. 1-6.
URIhttp://hdl.handle.net/2117/178157
Other identifiershttps://www.iri.upc.edu/publications/show/2256
Collections
Share: