On inferring intentions in shared tasks for industrial collaborative robots 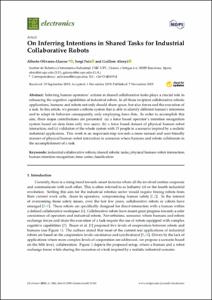 Document typeArticle
Rights accessOpen Access
European Commission's projectHUMOUR - HUman behavioral Modeling for enhancing learning by Optimizing hUman-Robot interaction (EC-FP7-231724)
Abstract
Inferring human operators' actions in shared collaborative tasks, plays a crucial role in enhancing the cognitive capabilities of industrial robots. In all these incipient collaborative robotic applications, humans and robots not only should share space but also forces and the execution of a task. In this article, we present a robotic system which is able to identify different human's intentions and to adapt its behavior consequently, only by means of force data. In order to accomplish this aim, three major contributions are presented: (a) force-based operator's intent recognition, (b) force-based dataset of physical human-robot interaction and (c) validation of the whole system in a scenario inspired by a realistic industrial application. This work is an important step towards a more natural and user-friendly manner of physical human-robot interaction in scenarios where humans and robots collaborate in the accomplishment of a task.
CitationOlivares, A.; Foix, S.; Alenyà, G. On inferring intentions in shared tasks for industrial collaborative robots. "Electronics", 2019, vol. 8, núm. 11, p. 1-22.
URIhttp://hdl.handle.net/2117/178124
DOI10.3390/electronics8111306
ISSN2079-9292
Publisher versionhttps://www.mdpi.com/2079-9292/8/11/1306
Collections
Share: