Towards a 20m global building map from Sentinel-1 SAR Data 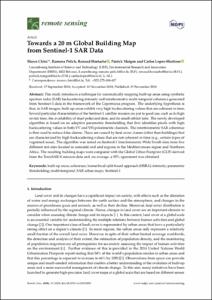 This study introduces a technique for automatically mapping built-up areas using synthetic aperture radar (SAR) backscattering intensity and interferometric multi-temporal coherence generated from Sentinel-1 data in the framework of the Copernicus program. The underlying hypothesis is that, in SAR images, built-up areas exhibit very high backscattering values that are coherent in time. Several particular characteristics of the Sentinel-1 satellite mission are put to good use, such as its high revisit time, the availability of dual-polarized data, and its small orbital tube. The newly developed algorithm is based on an adaptive parametric thresholding that first identifies pixels with high backscattering values in both VV and VH polarimetric channels. The interferometric SAR coherence is then used to reduce false alarms. These are caused by land cover classes (other than buildings) that are characterized by high backscattering values that are not coherent in time (e.g., certain types of vegetated areas). The algorithm was tested on Sentinel-1 Interferometric Wide Swath data from five different test sites located in semiarid and arid regions in the Mediterranean region and Northern Africa. The resulting building maps were compared with the Global Urban Footprint (GUF) derived from the TerraSAR-X mission data and, on average, a 92% agreement was obtained.
CitationChini, M. [et al.]. Towards a 20m global building map from Sentinel-1 SAR Data. "Remote sensing", 19 Novembre 2018, vol. 10, núm. 11, p. 1833-1-1833-19.
URIhttp://hdl.handle.net/2117/178019
DOI10.3390/rs10111833
ISSN2072-4292
Publisher versionhttps://www.mdpi.com/2072-4292/10/11/1833