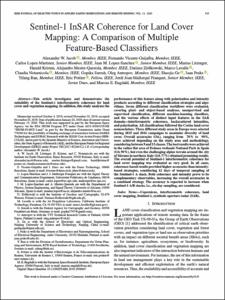 This article investigates and demonstrates the suitability of the Sentinel-1 interferometric coherence for land cover and vegetation mapping. In addition, this study analyzes the performance of this feature along with polarization and intensity products according to different classification strategies and algorithms. Seven different classification workflows were evaluated, covering pixel- and object-based analyses, unsupervised and supervised classification, different machine-learning classifiers, and the various effects of distinct input features in the SAR domain—interferometric coherence, backscattered intensities, and polarization. All classifications followed the Corine land cover nomenclature. Three different study areas in Europe were selected during 2015 and 2016 campaigns to maximize diversity of land cover. Overall accuracies (OA), ranging from 70% to 90%, were achieved depending on the study area and methodology, considering between 9 and 15 classes. The best results were achieved in the rather flat area of Doñana wetlands National Park in Spain (OA 90%), but even the challenging alpine terrain around the city of Merano in northern Italy (OA 77%) obtained promising results. The overall potential of Sentinel-1 interferometric coherence for land cover mapping was evaluated as very good. In all cases, coherence-based results provided higher accuracies than intensity-based strategies, considering 12 days of temporal sampling of the Sentinel-1 A stack. Both coherence and intensity prove to be complementary observables, increasing the overall accuracies in a combined strategy. The accuracy is expected to increase when Sentinel-1 A/B stacks, i.e., six-day sampling, are considered.
CitationJacob, A. [et al.]. Sentinel-1 InSAR coherence for land cover mapping: a comparison of multiple feature-based classifiers. "IEEE journal of selected topics in applied earth observations and remote sensing", 22 Gener 2020, vol. 13, p. 535-552.
URIhttp://hdl.handle.net/2117/178016
DOI10.1109/JSTARS.2019.2958847
ISSN1939-1404
Publisher versionhttps://ieeexplore.ieee.org/document/8966616