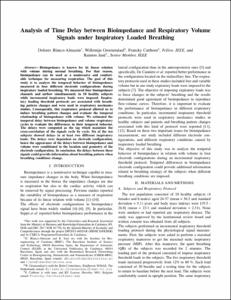 Document typeArticle
PublisherInstitute of Electrical and Electronics Engineers (IEEE)
Rights accessOpen Access
Abstract
Bioimpedance is known for its linear relation with volume during normal breathing. For that reason, bioimpedance can be used as a noninvasive and comfortable technique for measuring respiration. The goal of this study is to analyze the temporal behavior of bioimpedance measured in four different electrode configurations during inspiratory loaded breathing. We measured four bioimpedance channels and airflow simultaneously in 10 healthy subjects while incremental inspiratory loads were imposed. Inspiratory loading threshold protocols are associated with breathing pattern changes and were used in respiratory mechanics studies. Consequently, this respiratory protocol allowed us to induce breathing pattern changes and evaluate the temporal relationship of bioimpedance with volume. We estimated the temporal delay between bioimpedance and volume respiratory cycles to evaluate the differences in their temporal behavior. The delays were computed as the lag which maximize the cross-correlation of the signals cycle by cycle. Six of the ten subjects showed delays in at least two different inspiratory loads. The delays were dependent on electrode configuration, hence the appearance of the delays between bioimpedance and volume were conditioned to the location and geometry of the electrode configuration. In conclusion, the delays between these signals could provide information about breathing pattern when breathing conditions change.
Description
© 2019 IEEE. Personal use of this material is permitted. Permission from IEEE must be obtained for all other uses, in any current or future media, including reprinting /republishing this material for advertising or promotional purposes, creating new collective works, for resale or redistribution to servers or lists, or reuse of any copyrighted component of this work in other works
CitationBlanco-Almazán, D. [et al.]. Analysis of time delay between bioimpedance and respiratory volume signals under inspiratory loaded breathing. "Annual International Conference of the IEEE Engineering in Medicine and Biology Society", 7 Octubre 2019, p. 2365-2368.
URIhttp://hdl.handle.net/2117/177896
DOI10.1109/EMBC.2019.8857705
ISSN1557-170X
Publisher versionhttps://ieeexplore.ieee.org/document/8857705
Collections
Share: