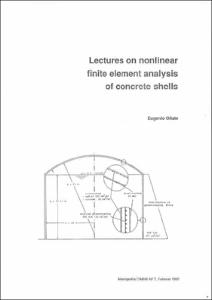 This monograph presents 4 lectures on non linear analysis of concrete shells by the finite element method. The lectures were prepared by the author for the course on "Non linear analysis of shells by finite elements" held at the International Center for Mechanics Sciences in Udine, Italy on June 24-28th 1991. The content of the lectures presents an overview of the different aspects involved in the analysis of concrete shells by finite elements. Thus, Lecture 1 introdeuces the basic concepts of the analysis of reinforced concrete shell structures using flat shell and curved degenerated layered shell finite elements. Both the geometric and kinematic assumptions are described in detail together with the respective finite element formulation and the numerical algorithm for non linear elasto-plastic analysis including the effect of moderately large displacements. Lecture 2 presents an overview of the constitutive behaviour of concrete and steel in a form suitable for numerical computations using the finite element models described in previous lecture. The reinforcing steel bars are modelled with a simple elasto-plastic model. Hovewer, two conceptualy different concrete models are presented. The first model is based on elasto-plastic theory to describe the compressive behaviour of concrete, whereas a linear orthotropic elasto-brittle model is used for modelling the cracking behaviour under tensile conditions. This ``elasto-platic-brittle model has been extensively used by Owen and Figueiras and most of the concepts presented emanate from reference [18] of this chapter. The second model is based on the assumptions that both the tensile and compressive behaviour of concrete can be treated under the unified framework of elasto-plasticity theory. This model termed ``plastic-damage model has ben proposed by Lubliner, Oller, Oliver and O\~nate in different publications which main concepts are summarized in the lecture (see refs. [33-38] of this chapter). In Lecture 3 the basic finite element formulation for the analysis of stiffened concrete shells via the use of eccentric beams is described. Finally, in Lecture 4 some examples of applications of the finite element formulations presented to the non-linear analysis of different reinforced concrete shell structures analyzed by different authors are described. Examples included range from the analysis of plain and pre-stressed concrete deep beams, to more sophisticated shell type structures including the nonlinear behaviour of a composite steel-concrete girder bridge and a cryogenic concrete liquid gas tank under severe thermal conditions. This monograph has been written exclusively with didactic purposes. Most of the ideas included in the text have been extracted from research publications by the author and many others. The interested reader will be able to find details on the different subjects treated in the many references included at the end of each chapter.
CitationOñate, E. "Lectures on nonlinear finite element analysis of concrete shells". Barcelona: International Centre for Numerical Methods in Engineering (CIMNE), 1992. ISBN 84-87867-06-5.
URIhttp://hdl.handle.net/2117/177886
ISBN84-87867-06-5
Publisher versionhttps://books.cimne.com/shop/lectures-on-nonlinear-finite-element-analysis-of-concrete-shells/
Other identifiershttps://www.scipedia.com/public/Onate_2019a