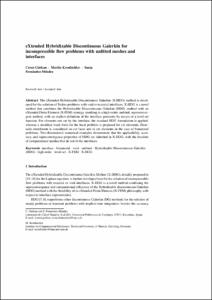 The eXtended hybridizable discontinuous Galerkin (X-HDG) method is developed for the solution of Stokes problems with void or material interfaces. X-HDG is a novel method that combines the hybridizable discontinuous Galerkin (HDG) method with an eXtended finite element strategy, resulting in a high-order, unfitted, superconvergent method, with an explicit definition of the interface geometry by means of a level-set function. For elements not cut by the interface, the standard HDG formulation is applied, whereas a modified weak form for the local problem is proposed for cut elements. Heaviside enrichment is considered on cut faces and in cut elements in the case of bimaterial problems. Two-dimensional numerical examples demonstrate that the applicability, accuracy, and superconvergence properties of HDG are inherited in X-HDG, with the freedom of computational meshes that do not fit the interfaces
CitationGurkan, C.; Kronbichler, M.; Fernandez, S. eXtended hybridizable discontinuous Galerkin for incompressible flow problems with unfitted meshes and interfaces. "International journal for numerical methods in engineering", 17 Febrer 2019, vol. 117, núm. 7, p. 756-777.
URIhttp://hdl.handle.net/2117/177790
DOI10.1002/nme.5975
ISSN0029-5981
Publisher versionhttps://onlinelibrary.wiley.com/doi/abs/10.1002/nme.5975