Twists of opposite handedness on a scroll wave 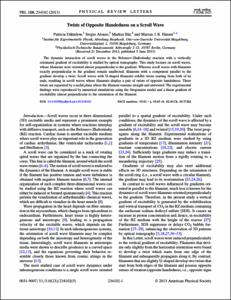 Except where otherwise noted, content on this work is licensed under a Creative Commons license : Attribution-NonCommercial-NoDerivs 3.0 Spain
Abstract
The dynamic interaction of scroll waves in the Belousov-Zhabotinsky reaction with a vertically orientated gradient of excitability is studied by optical tomography. This study focuses on scroll waves, whose filaments were oriented almost perpendicular to the gradient. Whereas scroll waves with filaments exactly perpendicular to the gradient remain unaffected, filaments with a component parallel to the gradient develop a twist. Scroll waves with U-shaped filaments exhibit twists starting from both of its ends, resulting in scroll waves whose filaments display a pair of twists of opposite handedness. These twists are separated by a nodal plane where the filament remains straight and untwisted. The experimental findings were reproduced by numerical simulations using the Oregonator model and a linear gradient of excitability almost perpendicular to the orientation of the filament.
CitationDähmlow, P. [et al.]. Twists of opposite handedness on a scroll wave. "Physical review letters", 5 Juny 2013, vol. 110, núm. 23, p. 234102-1-234102-5.
URIhttp://hdl.handle.net/2117/177776
DOI10.1103/PhysRevLett.110.234102
ISSN0031-9007
Publisher versionhttps://journals.aps.org/prl/abstract/10.1103/PhysRevLett.110.234102
Collections
Share: