Building Narkofim house in Moscow : lessons from the Weimar Republic 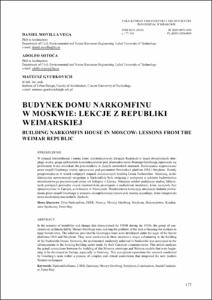 Gyurkovich, Mateusz
Document typeArticle
Rights accessOpen Access
All rights reserved. This work is protected by the corresponding intellectual and industrial property rights. Without prejudice to any existing legal exemptions, reproduction, distribution, public communication or transformation of this work are prohibited without permission of the copyright holder
Abstract
In the scenario of instability and change that characterised the USSR during the 1920s, the group of constructivist architects led by Moisey Ginzburg were tackling the problem of the lack of housing for workers in large Soviet cities. The solutions provided by Ginzburg’s team were developed under the aegis of the Soviet platforms OSA and Stroykom. They were conducted in three successive stages culminating in the building of the Narkomfin House. However, the architectural modernity achieved in Narkomfin was associated to the advancements in the housing building sector made by their European contemporaries. This article analyses the actual connections between the building of this Moscow prototype and Western models that were beginning to be developed in Europe, especially in Germany. This conception repositions the research conducted by Ginzburg’s team within a process of complex and critical assimilation that integrated the new modern Western techniques.
Location
1: Malyy Konyushkovskiy Pereulok, 25, Moskva, Rússia, 123242
CitationMovilla, D.; Sotoca, A.; Gyurkovich, M. Building Narkofim house in Moscow : lessons from the Weimar Republic. "Teka Komisji Urbanistyki i Architektury", 2018, vol. 26, núm. 2018, p. 177-196.
URIhttp://hdl.handle.net/2117/177768
ISSN2450-0038
Publisher versionhttp://teka.pk.edu.pl/wp-content/uploads/2018/12/Teka-2018-13.pdf
Collections
Share: