Towards de Cracow metropolis: a dream or a reality. Selected issues. 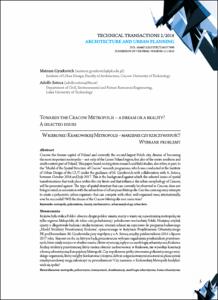 Cracow, the former capital of Poland and currently the second-largest Polish city, dreams of becoming the most important metropolis – not only of the Lesser Poland region, but also of the entire southern and south-eastern part of Poland. This paper, based on long-term research and field studies, also refers, in part, to the “Model of the Spatial Structure of Cracow” research programme, which was conducted at the Institute of Urban Design of the CUT under the guidance of M. Gyurkovich with collaboration with A. Sotoca, between October 2016 and July 2017. This is the background against which the selected issues of spatial transformations that took place within the city limits and that influence the urban morphology of Cracow, will be presented against. The type of spatial structure that can currently be observed in Cracow, does not bring to mind an association with the urban form of a European Metropolis. Can the contemporary attempts to create a polycentric urban organism- that can compete with other, well-organised ones, internationally, ever be successful? Will the dream of the Cracow Metropolis ever come true?