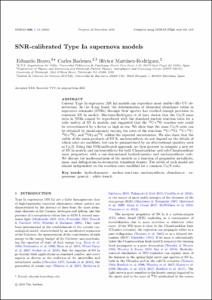 Current Type Ia supernova (SN Ia) models can reproduce most visible+IR + UV observations. In the X-ray band, the determination of elemental abundance ratios in supernova remnants (SNRs) through their spectra has reached enough precision to constrain SN Ia models. Martínez-Rodríguez et al have shown that the Ca/S mass ratio in SNRs cannot be reproduced with the standard nuclear reaction rates for a wide variety of SN Ia models, and suggested that the 12C+16O reaction rate could be overestimated by a factor as high as ten. We show that the same Ca/S ratio can be obtained by simultaneously varying the rates of the reactions 12C + 16O, 12C + 12C, 16O + 16O, and 16O(¿, a)12C within the reported uncertainties. We also show that the yields of the main products of SN Ia nucleosynthesis do not depend on the details of which rates are modified, but can be parametrized by an observational quantity such as Ca/S. Using this SNR-calibrated approach, we then proceed to compute a new set of SN Ia models and nucleosynthesis for both Chandrasekhar and sub-Chandrasekhar mass progenitors with a 1D hydrodynamics and nucleosynthesis code. We discuss the nucleosynthesis of the models as a function of progenitor metallicity, mass, and deflagration-to-detonation transition density. The yields of each model are almost independent on the reaction rates modified for a common Ca/S ratio.
CitationBravo, E.; Badenes, C.; Martinez, H. SNR-calibrated Type Ia supernova models. "Monthly notices of the Royal Astronomical Society", Febrer 2019, vol. 482, p. 4346-4363.
URIhttp://hdl.handle.net/2117/177741
DOI10.1093/mnras/sty2951
ISSN0035-8711
Publisher versionhttps://academic.oup.com/mnras/article/482/4/4346/5159491