Development of a hybrid FE-SEA-experimental model 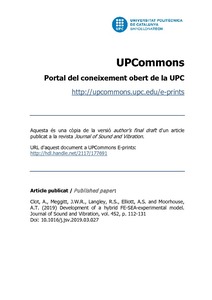 Clot, A. Development of a Hybrid FE_SEA_Experimental Model.pdf (3,580Mb)
Share:

Meggitt, J.W.R.
Langley, Rob
Elliott, A
moorhouse, A
Document typeArticle
Rights accessOpen Access
Abstract
The vibro-acoustic response of complex structures with uncertain properties is a problem of great concern for modern industries. In recent years, much research has been devoted to the prediction of this response in the mid-frequency range where, because neither finite element analysis nor statistical energy analysis are appropriate, a hybrid deterministic-statistical approach becomes a suitable solution. Despite its potential, the existence of systems with active components that are too complex to be modelled numerically can limit the application of the method. However, it may still be possible to measure the dynamical response of these structures experimentally. This paper is hence concerned with the possibility of integrating experimental data into a hybrid deterministic-statistical method. To explain the new methodology, two similar case studies, consisting of a deterministic source structure that is coupled to a statistical plate receiver using passive isolators, are used. For each case, the vibratory excitation, characterised using in-situ blocked force measurements, the source structure mobility, and the isolators stiffness are experimentally determined and inserted in the proposed hybrid model of the system. The paper explains the techniques used for obtaining the considered experimental data and the theoretical model proposed for describing the systems. To validate the proposed approach, the predicted vibration response of the receiver plate is compared to the one obtained by experimentally randomising the plate in both case studies. The results show that a good agreement is obtained, both for the ensemble average response of the receiver structure and for the ensemble variance of this response. Moreover, the upper confidence bounds predicted by the hybrid method enclose well the ensemble of experimental results. The cause of some narrow-band differences observed between the predicted response and the experimental measurements is finally discussed. It is therefore concluded that the capabilities of the hybrid deterministic-statistical method can be clearly enhanced through the incorporation of experimental data prescribing active sub-systems
CitationClot, A. [et al.]. Development of a hybrid FE-SEA-experimental model. "Journal of sound and vibration", 1 Desembre 2019, vol. 452, p. 112-131.
URIhttp://hdl.handle.net/2117/177691
DOI10.1016/j.jsv.2019.03.027
ISSN0022-460X
Publisher versionhttps://www.sciencedirect.com/science/article/abs/pii/S0022460X19301993
Collections
Share: