Exact results for the boundary energy of one-dimensional bosons 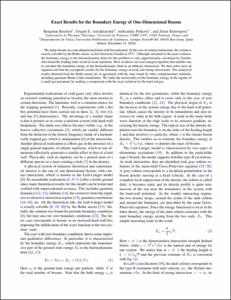 Petkovic, Aleksandra
Ristivojevic, Zoran
Document typeArticle
PublisherAmerican Institute of Physics (AIP)
Rights accessOpen Access
Abstract
We study bosons in a one-dimensional hard-wall box potential. In the case of contact interaction, the system is exactly solvable by the Bethe ansatz, as first shown by Gaudin in 1971. Although contained in the exact solution, the boundary energy in the thermodynamic limit for this problem is only approximately calculated by Gaudin, who found the leading order result at weak repulsion. Here we derive an exact integral equation that enables one to calculate the boundary energy in the thermodynamic limit at an arbitrary interaction. We then solve such an equation and find the asymptotic results for the boundary energy at weak and strong interactions. The analytical results obtained from the Bethe ansatz are in agreement with the ones found by other complementary methods, including quantum Monte Carlo simulations. We study the universality of the boundary energy in the regime of a small gas parameter by making a comparison with the exact solution for the hard rod gas.
CitationReichert, B. [et al.]. Exact results for the boundary energy of one-dimensional bosons. "Physical review letters", 17 Desembre 2019, vol. 123, núm. 250602, p. 1-7.
URIhttp://hdl.handle.net/2117/177679
DOI10.1103/PhysRevLett.123.250602
ISSN1079-7114
Publisher versionhttps://journals.aps.org/prl/abstract/10.1103/PhysRevLett.123.250602
Collections
Share: