Combining ground penetrating radar and seismic surveys in the assessment of cultural heritage buildings: The study of roofs, columns, and ground of the gothic church Santa Maria del Mar, in Barcelona (Spain) 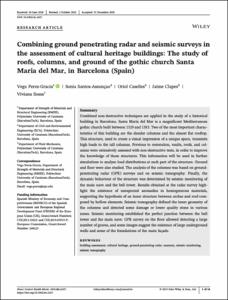 Document typeArticle
PublisherWiley
Rights accessOpen Access
Abstract
Combined non-destructive techniques are applied in the study of a historical building in Barcelona. Santa Maria del Mar is a magnificent Mediterranean gothic church built between 1329 and 1383. Two of the most important characteristics of this building are the slender columns and the almost flat rooftop. This structure, used to create a visual impression of a unique space, transmits high loads to the tall columns. Previous to restoration, vaults, roofs, and columns were extensively assessed with non-destructive tests, in order to improve the knowledge of those structures. This information will be used in further simulations to analyse load distributions at each part of the structure. Ground and floor were also studied. The analysis of the columns was based on ground- penetrating radar (GPR) surveys and on seismic tomography. Finally, the dynamic behaviour of the structure was determined by seismic monitoring of the main nave and the bell tower. Results obtained at the radar survey highlight the existence of unexpected anomalies in homogeneous materials, supporting the hypothesis of an inner structure between arches and roof composed by hollow elements. Seismic tomography defined the inner geometry of the columns and detected some damage or lower quality stone in various zones. Seismic monitoring established the perfect junction between the bell tower and the main nave. GPR survey on the floor allowed detecting a large number of graves, and some images suggest the existence of large underground walls and some of the foundations of the main façade.
Location
1: Carrer dels Sombrerers, 7, 08003 Barcelona, Espanya
CitationPerez-Gracia, V. [et al.]. Combining ground penetrating radar and seismic surveys in the assessment of cultural heritage buildings: The study of roofs, columns, and ground of the gothic church Santa Maria del Mar, in Barcelona (Spain). "Structural control and health monitoring", 1 Gener 2019, p. 1-14.
URIhttp://hdl.handle.net/2117/177657
DOI10.1002/stc.2327
ISSN1545-2263
Publisher versionhttps://onlinelibrary.wiley.com/doi/full/10.1002/stc.2327
Collections
Share: